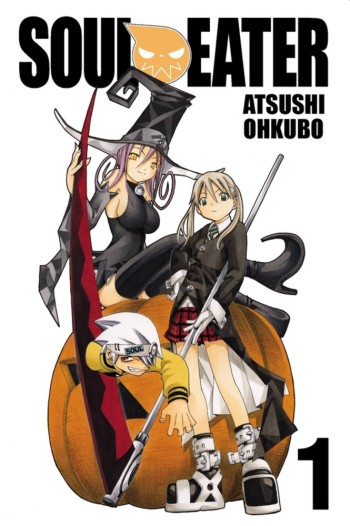 I was lucky enough to win the first 13 volumes of Soul Eater for $60 on eBay, which, considering they were only lightly used, was a steal. My biggest inspiration for blogging has been through manga review sites, so in the interest of cranking out more regular content, I thought I’d write about the books I’ve been reading. Yesterday, I read the first volume of Soul Eater!

I had next to no knowledge of the series or its plot when I jumped on that auction. A friend of mine is a big fan of the anime series, but she never read the manga. None of my other friends had anything to say about it, either, so I went into this more or less blind. I picked it up mostly because I’ve been interested in following some shonen manga.

The plot of this volume moved slowly – of the four chapters present here, three are isolated prologues meant to introduce the characters. As I understand, there are meisters paired with sentient, shapeshifting weapons, who try to gather souls (hence the title) to attain a new, stronger form. We meet three “teams,” so to speak. There’s Maka and Soul Eater, a scythe; Black Star, an assassin paired with Tsubaki, a shuriken; and Death the Kid, the son of a prominent figure with Liz and Patty Johnson, two revolvers. We don’t get a sense of their motivations or inner workings in this volume. We just learn that they want to collect as many souls as they can.

They’re fun characters with unique quirks. Maka is probably the least distinctive of the three, but I thought she had good chemistry with Soul Eater. They made the best team during battles, and the way they take Blair down was so satisfying to read. At least here, she seems to rush into things without thinking – when they defeat Blair, they later realize she was a magical cat, who tells them, “you humans came to that conclusion on your own.” She drops subtle hints earlier, but I didn’t get the impression it was intended to be too obvious to the reader. I got the sense that Maka was a thoughtful character, and I hope she grows out of this carelessness. The way they take out Blair suggests she’s got it in her.

I loved Black Star – if these chapters are just meant to introduce and set up the characters, his was exemplary. I loved how the chapter opens by stating the rules of assassins – to be quiet, to control breathing, and to strike before you’re caught – and then sets up Black Star, a young assassin, to be none of those things. He’s such a loudmouth! There are quite a few gags where his plans utterly fail due to his habit. I don’t think this is meant to be that funny, but it kept my attention. Tsubaki is his foil, and for her sake, I hope Black Star can get his act together.

Death the Kid is pretty fun, too. His obsession with symmetry is played up to high heaven in his intro chapter. He has good chemistry with his weapons, though I didn’t get the sense he fought well – he just kind of got annoyed at their enemies and left them to fight on their own. Liz and Patty seemed to do just fine without him.

The art is great in this series – the entire cast is made of snappy dressers with distinct looks. I particularly love Death the Kid’s suit and gloves. It also warmed my heart to see that Soul Eater’s a big fan of 90s electronic music, what with the Portishead and Aphex Twin posters on his wall. The only thing that bugs me is the way Ohkubo draws characters’ faces. Their eyes are sometimes so far apart! The gap between them is offputting, and I hope he fixes that in later volumes.

I don’t know that this one of the greatest volume 1s I’ve ever read, but it definitely did a good job of setting up the characters. I like all of them already, especially Black Star. I’m excited to read more of this series!

Soul Eater is written and drawn by Ohkubo Atsushi and was serialized in Square Enix’s Monthly Shonen Gangan from 2004-2013. It was later collected in 25 volumes. It has been licensed in North America by Yen Press, who released all 25 volumes between 2009 and 2015. Check out Yen Press’ page on the manga here.