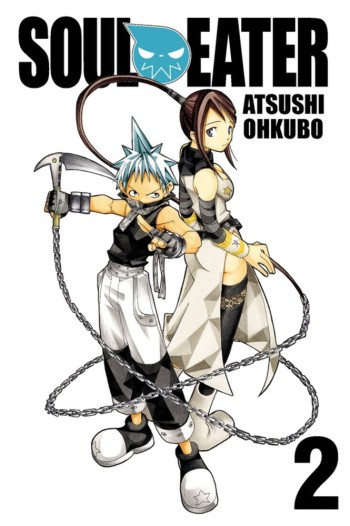 On to Volume 2! There still isn’t much of a coherent plot, but these chapters had continuity that the previous volume lacked.

At the end of Volume 1, Maka, Soul, Black Star, and Tsubaki had to visit the house of Dr. Stein, a teacher who was said to attack students, and engage him in battle in order to not get expelled. They engage him in battle, despite a severe gap in strength, and later pass their “remedial lesson.” After that, Dr. Stein becomes one of their teachers at school.The next chapter integrates Death the Kid into the main cast, where Soul and Black Star skip class to fight him outside the school entrance. The next two chapters introduce a character named Crona, who seems to be one of the main antagonists.

The best part of these chapters was seeing Maka and Soul’s dynamic as a duo. During the battle with Dr. Stein, Maka gets discouraged when, using her ability to measure the size of an opponent’s soul, she sees exactly how great the discrepancy in strength is. She keels over and laments that it’s no use. But Soul runs to her side and says, “it’s not like you saw the future!” With some encouragement, he’s able to convince Maka to continue battling. They then successfully perform a team attack they previously couldn’t land in the last volume. Later on, when Maka’s in a pinch, Soul rushes to her side and puts her life ahead of his. It was so charming. Black Star and Death the Kid took a backseat in these chapters, but Ohkubo made the most Maka’s spotlight in their place. Dr. Stein tries to argue that they’re absolutely not compatible, but they manage to beat the odds in a really touching way.

Though I do hope for some stated goals beyond the collectathon introduced in the prologues, I greatly enjoy that Ohkubo prefers to show elements of the world rather than tell. Black Star and Soul battle Death the Kid without their respective partners. Without explanation, you see that they’re not able to swap partners interchangeably. An earlier chapter states that the meister and weapon combo is like a guitar and amp: the weapon (i.e. the guitar) is fine on its own, but with the meister (the amp) its able to really sound out. This chapter shows the reader that the connection between meister and weapon is just as important as the components. Maka also gets an “I-told-you-so” moment by reminding Soul of all the times he made fun of her fighting style. It’s not just having the guitar to jam o ; you also have to have shared experience with it. I loved that!

The Crona chapters were weird. On the one hand, it was great for Maka to have an antagonist that lasted for more than a chapter, and Crona seemed to be of a comparable skill level. On the other, Crona didn’t seem to be a willing participant in the fight, as the heroes learn that Crona’s* weapon was implanted by a witch. It left me with an uneasy feeling. I haven’t made up my mind on how I feel yet. The witch, Medusa, appears to have snuck into Maka’s school, so I’m sure we haven’t seen the last of these characters yet.

Volume 2 is more world-building for Soul Eater. Part of me laments the fact that there’s no larger purpose yet and wishes that the stakes would get a bit higher soon. Then again, another part of me is really enjoying getting to know these characters and watching them mingle. I’m excited for the next volume!

Soul Eater is written and drawn by Ohkubo Atsushi and was serialized in Square Enix’s Monthly Shonen Gangan from 2004-2013. It was later collected in 25 volumes. It has been licensed in North America by Yen Press, who released all 25 volumes between 2009 and 2015. Check out Yen Press’ page on the manga here.