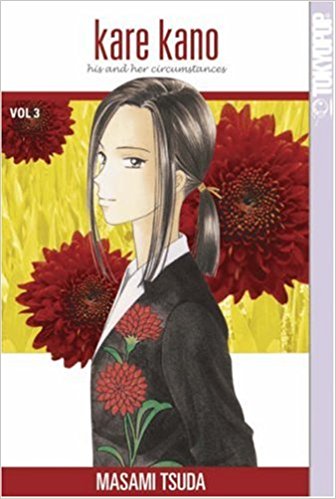 The last volume of Kare Kano had pretty art but not much in the way of plot. This one turns the tides a bit and adds some more drama.

Yukino and Arima’s grades are slipping very slightly. I wouldn’t personally be all that disappointed or concerned for them – dropping two places in the exam rankings is hardly cause for alarm, if you ask me – but their guidance counselor is upset enough that he literally asks them to stop seeing each other and focus on studying. They later convince him that they can balance their relationship with their studies, and they appear committed to make it work, as Yukino starts getting up early, studying during her downtime, and getting more rest.

Things take a twist as Maho is introduced. She is a schoolmate of Yukino’s, who plants the seed into her girlfriends’ heads that Yukino is not as she seems. This causes Yukino to get shunned by her peers at school. Rather than anguish over it, though, Yukino takes it in stride; she feels that, because she was so content with wearing a mask for most of her life, a backlash from her classmates was inevitable.

Whereas the last volume had some finicky drama in the form of Hideaki, this new conflict, where the girls silently shun her out of jealousy, felt more true to life. I remember how my classmates in high school had to put up with passive drama from others around them, and this felt realistic in that way. I also appreciate Yukino’s analysis of the situation. Though Arima and others comment that she has a wild personality, it’s clear her studying and good grades aren’t for nothing. She has a very good head on her shoulders and is trying to handle the cattiness as calmly as she can. It adds depth to her in ways that I like.

Kare Kano was written and illustrated by Tsuda Masami. It was serialized in Hakusensha’s LaLa magazine from 1996 to 2005, and it was later collected in 21 bound volumes. The series was licensed for release in North America by Tokyopop, who released all 21 volumes between 2003 and 2007. This release is now out-of-print.